2014: A Year of Community Projects for the Deserving

Where there is water, a community is bound to be born and grow. Communities spring up easily along rivers and other primary sources of water. Such is the importance of a clean source of water in order for a community to thrive and buzz with life. Some communities, however, are situated in areas where water is scarce, one of which is Sitio Catmon, San Rafael, Rodriguez, Rizal.

The municipality of Rodriguez is situated along the slopes of Sierra Madre mountain range. The barangay of San Rafael is located along the range and thus has running water from the mountains which they use for washing clothes, cleaning the dishes, and taking a bath. However, Sitio Catmon has only one existing deep well from which the residents of the communities get potable water for cooking and drinking. For this reason, the families in the area, which number at least fifty, do not have sufficient supply of potable water. 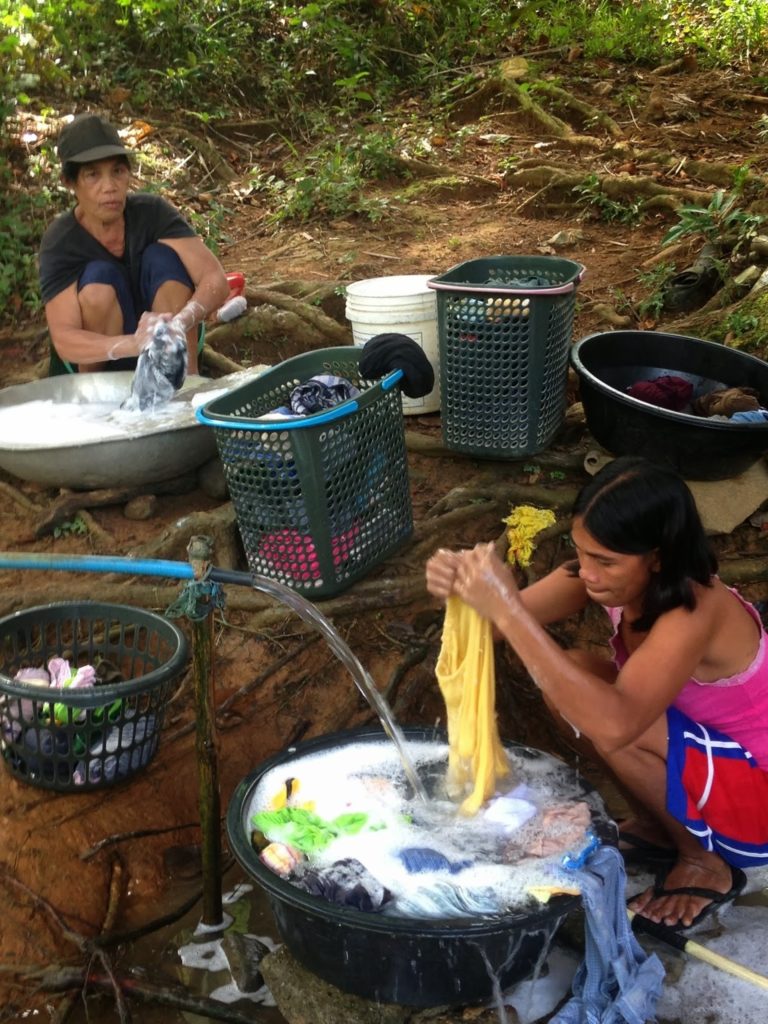 This water pipe tunnels the water from the mountains right into this common area where the residents wash their clothes. They also use this water for washing dishes and for taking a bath. 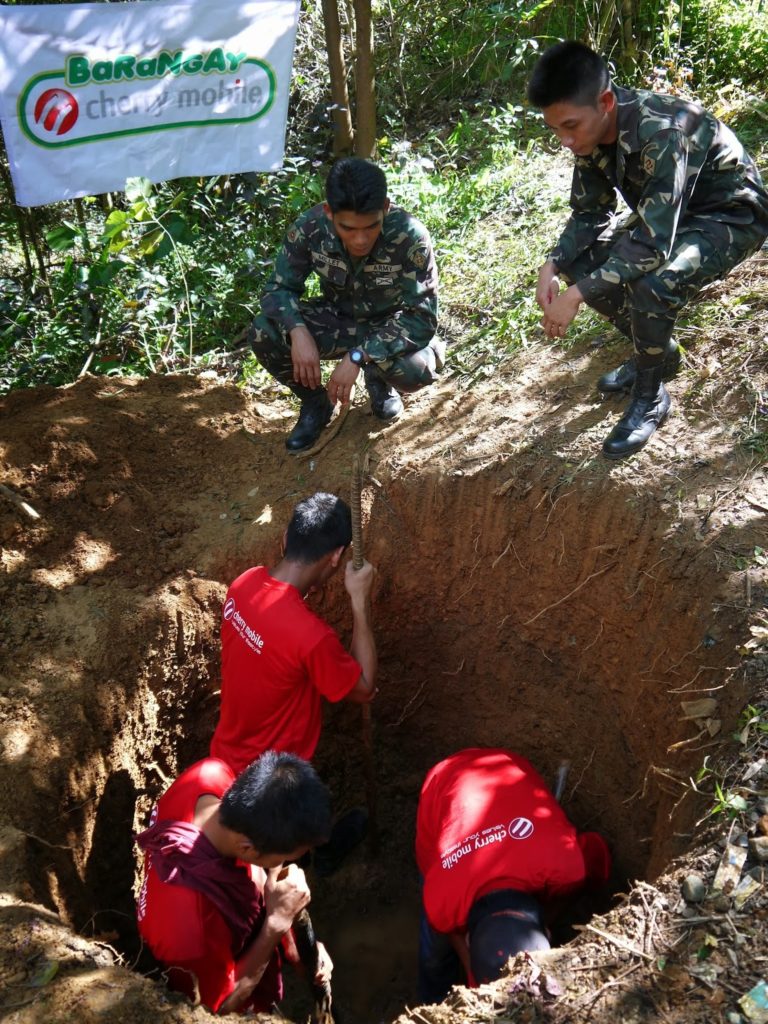 The installation of the deep well is a bayanihan effort between the soldiers from the 16th IB and the residents who would be benefiting from the water project. 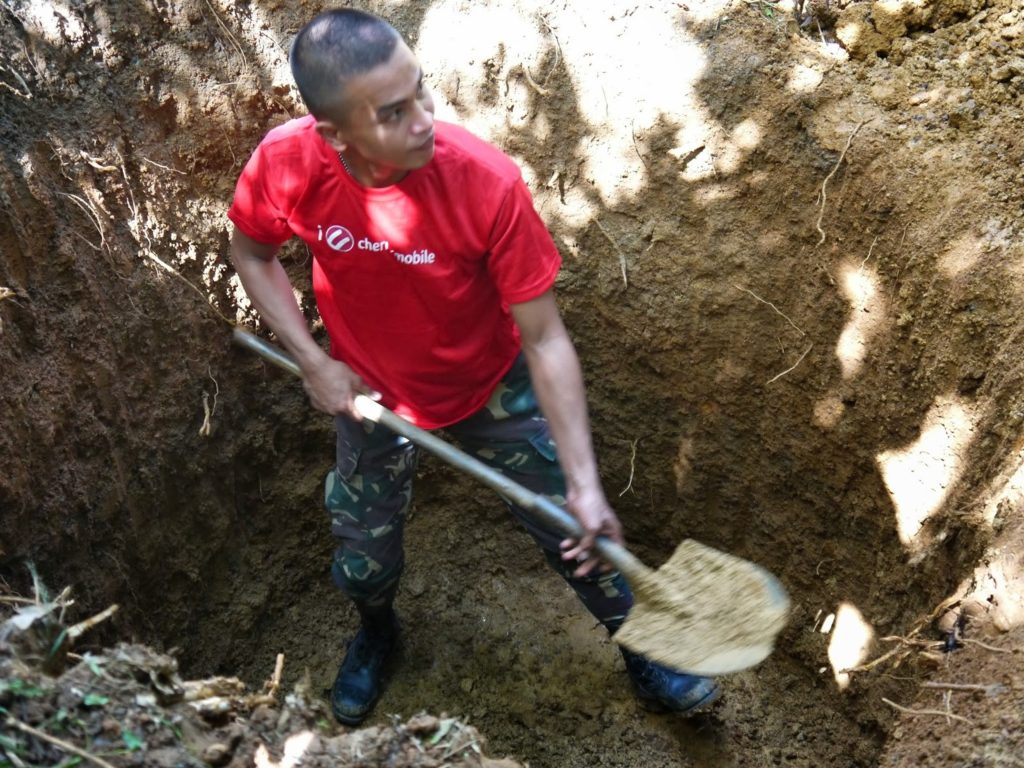 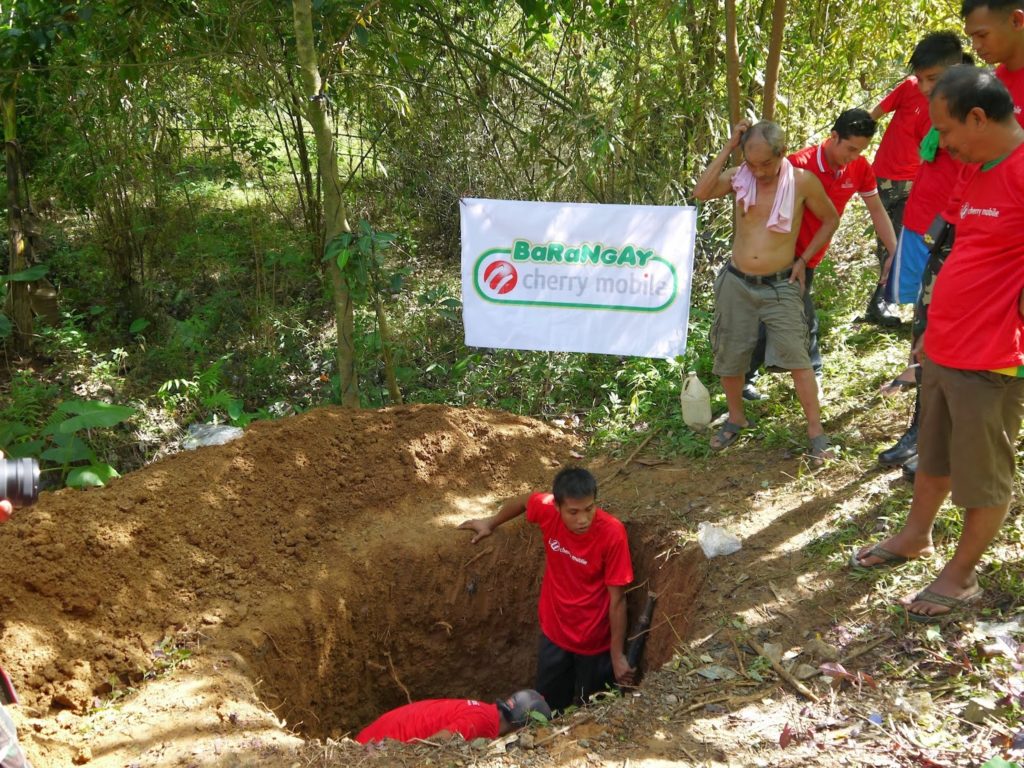 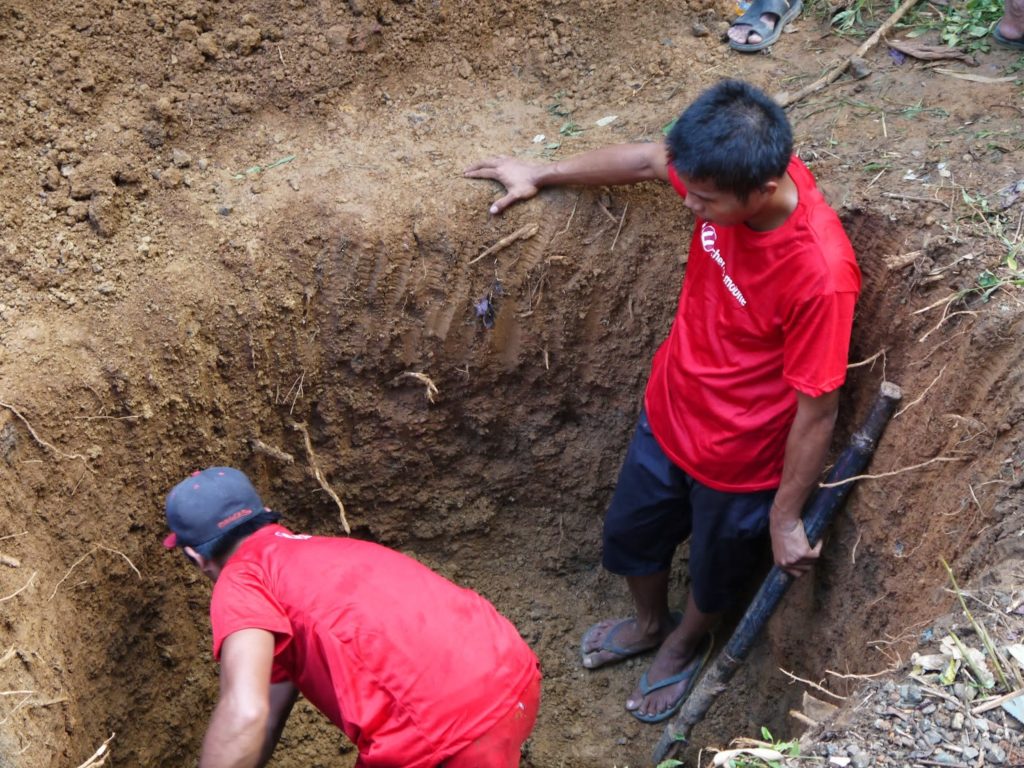 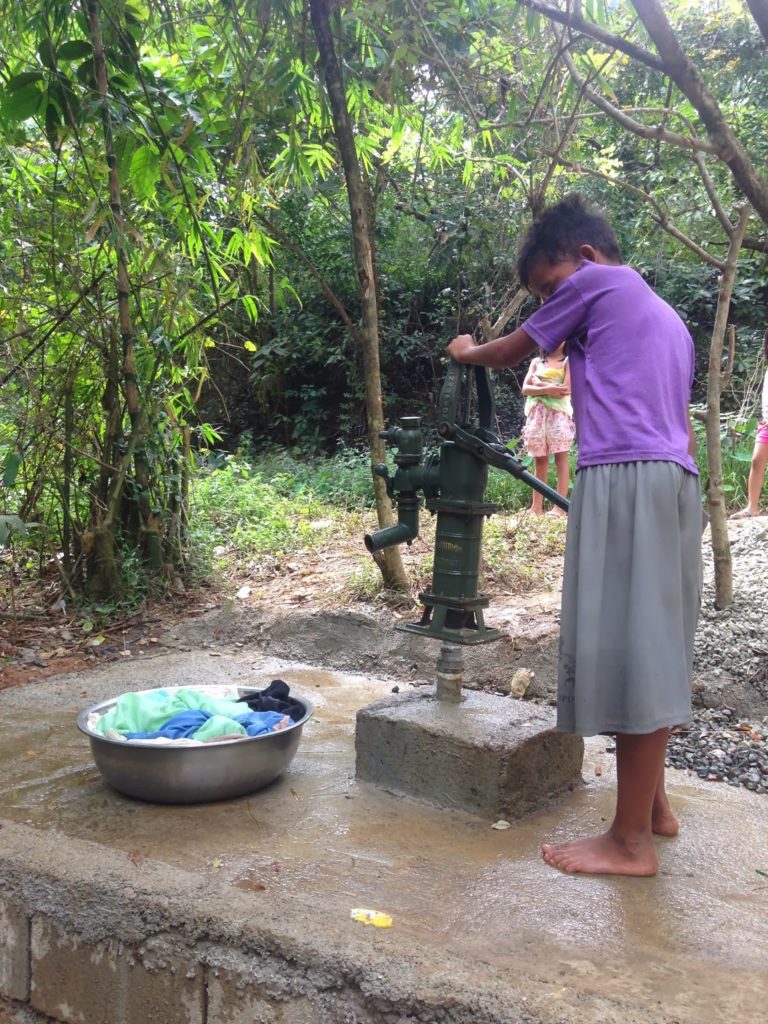 This boy tries to use the newly installed deep well for the laundry. The community began using the new water source as soon as it became functional for obtaining drinking water. 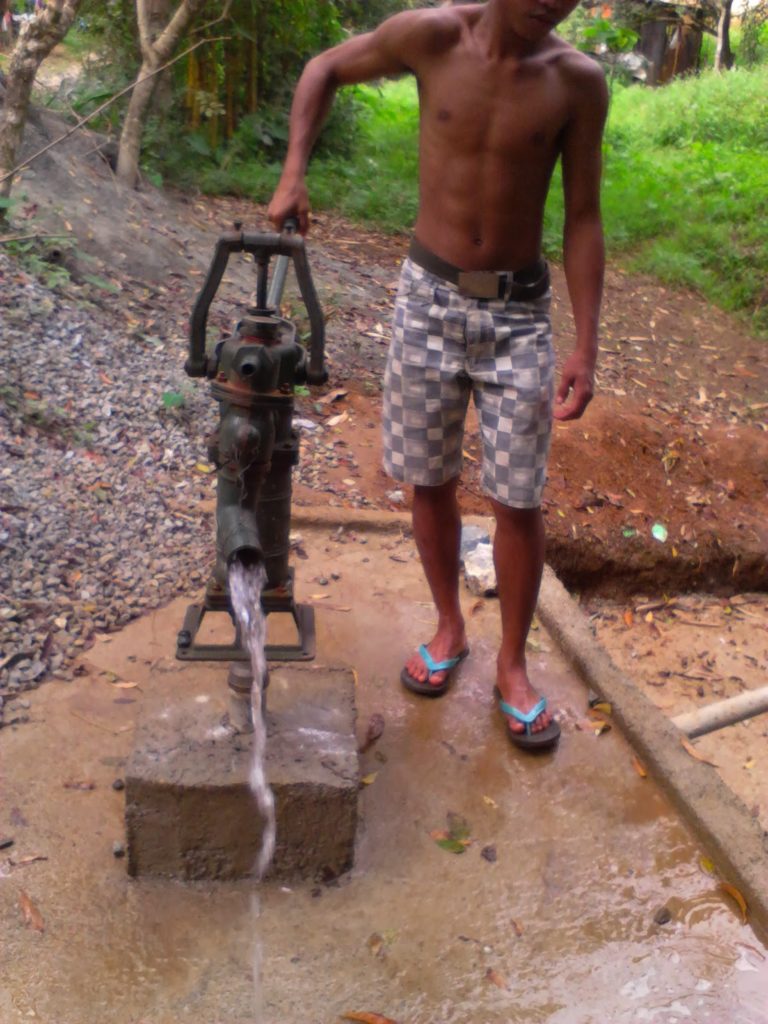 Water gushing out of the water pump marked success for the community project which served as Cherry Mobile’s early Christmas gift to Sitio Catmon. 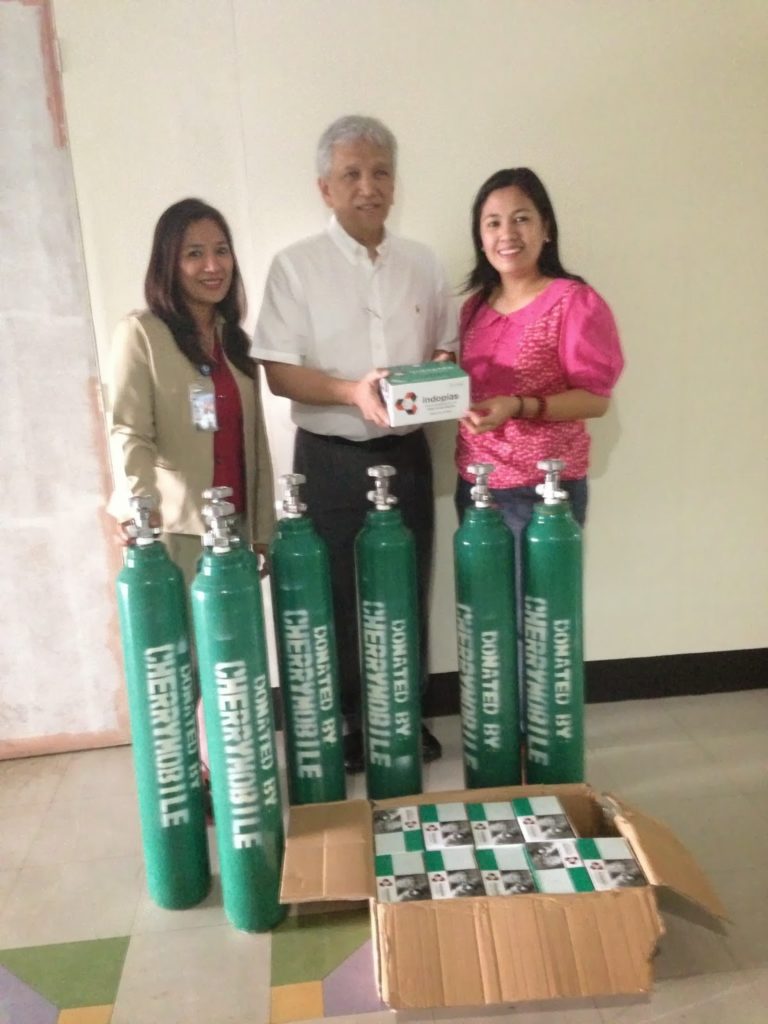 Cherry Mobile donated oxygen tanks and oxygen gauges or regulators to the Lung Center of the Philippines in Quezon City. These items were provided for the use of charity patients of the hospital. 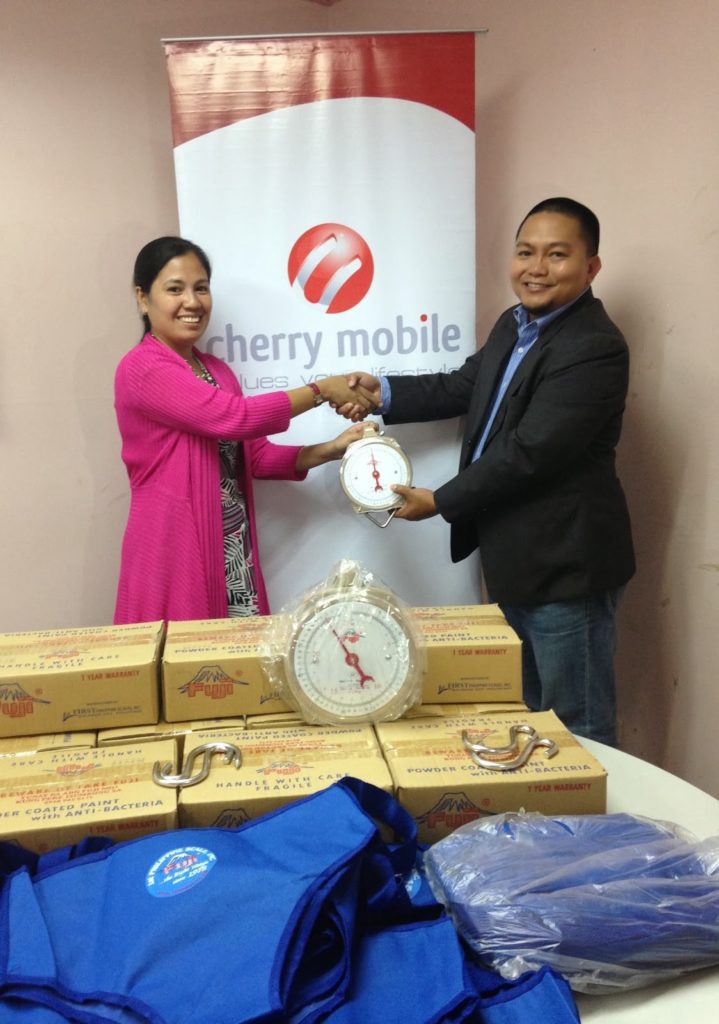 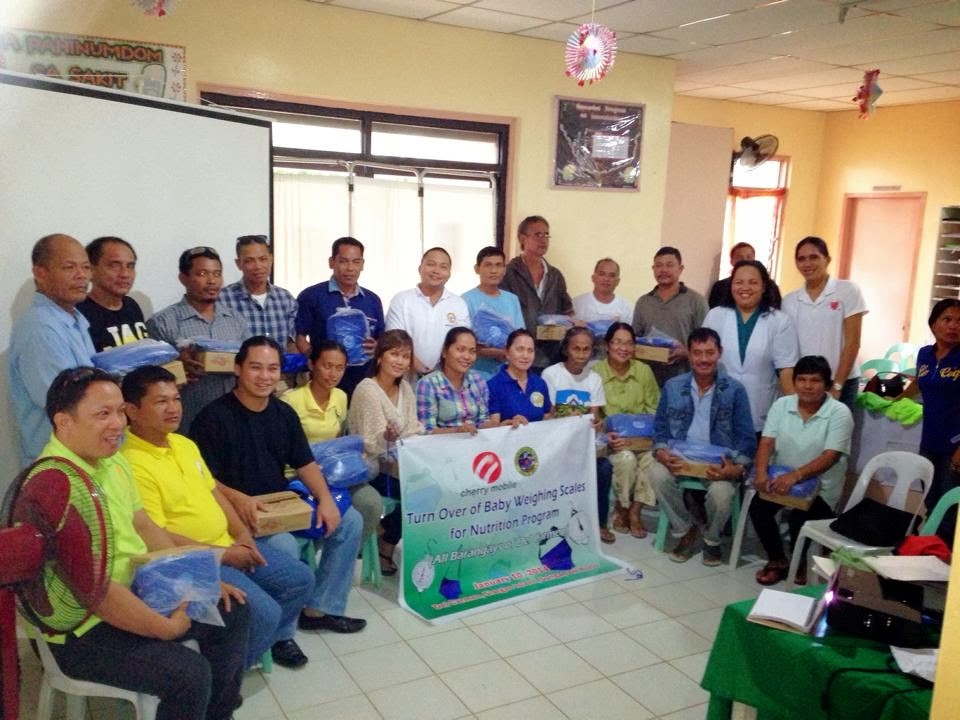 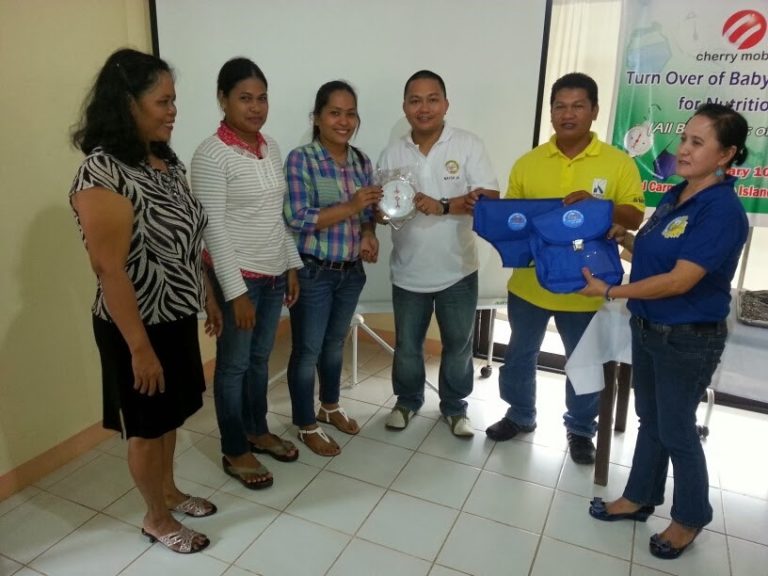 The baby weighing scales are entrusted to safekeeping by community health workers for use by residents in Del Carmen.

Soldiers from the 16th Infantry Batallion (IB) of the Armed Forces of the Philippines (AFP) recognized this need and suggested that barangay chairman Egardo Sison write a request to Barangay Cherry Mobile. The request sought funding for a water pump installation in Sitio Catmon. Barangay Cherry Mobile is a nationwide grant-giving program of Cherry Mobile. In behalf of the residents, Chairman Sison requested support for a deep well to be constructed in their community.

The request reached the management of the CSR department and received approved funding. Before 2013 ended, CSR manager Leah Lopez along with the supportive soldiers from the 16th IB went to Sitio Catmon for the installation of the deep well. The installation was completed in time for the holidays and served as an early Christmas gift to the community, providing clean water to at least 50 families.

This is good news, but the greater news is that Barangay Cherry Mobile did not stop in 2013 to grant projects benefiting poor communities in the country. In 2014, Barangay Cherry Mobile is still open to receive proposals or requests for consideration. And even greater news is that every single concerned person with a desire to help their community can determine the most pressing challenge that their community faces and send a project proposal or request to barangay@cherrymobile.com.ph to address that challenge. Senders must state in their letters the reason for their request. They also need to send photos of the area to support their story, and supply their contact details in the letter. Barangay Cherry Mobile will review all the submitted proposals and grant funding to one community project that will benefit the deserving community.

It does not take something special to be a hero. Anyone can touch a life, bring a change, rescue a family, and restore a community. Anyone can be a hero. And you can be one. If you think your community needs support to become progressive and sustainable, then determine the most pressing challenge and set the terms in which it could be solved. Finally, take a step toward its solution. Draft your project proposal now and send it to barangay@cherrymobile.com.ph. We can’t wait to extend help to those who need it!

For more information about Barangay Cherry Mobile and other CSR programs of Cherry Mobile, visit our Facebook page.

Written by Keren Grace Tandico
Posted by CM at 1:30 AM 2 Comments
Email ThisBlogThis!Share to TwitterShare to FacebookShare to Pinterest
Labels: barangay cherry mobile, charity, cherry mobile, Cherry Mobile CARES, community outreach, CSR
Tuesday, January 21, 2014
PREVENTIVE HEALTH CARE: Cherry Mobile Charity Medical Fund
Some of the health units in our country have the most diligent workers but lack the funds, the facilities, and equipment to serve their communities at their best. To meet this need, Cherry Mobile has set up a medical fund to benefit these institutions that have the potential for impact but are restricted by material funds.

Cherry Mobile set up its Charity Medical Fund, which refers to resources allotted to help public health units sustain their operational needs in order to serve the Filipino people better. This is one way of empowering the health units in the local scene so that in return, they could empower the residents in their respective communities, or in the case of medical institutions, to make health services available to charity patients.

Based primarily on the needs of the identified health unit, the Charity Medical Fund is utilized to purchase medical equipment as needed by the chosen institution. Donations may range from oxygen tanks to wheel chairs to hospital beds, among others.

The municipality has no hospital in its vicinity, and so to prevent the residents from getting sick and spending too much in hospitalization, the municipal health unit reinforces its life quality improvement program. They sought support from Cherry Mobile to purchase equipment for monitoring the weight of children in the community and combat malnutrition. They have also launched their feeding program. Cherry Mobile believes that this is an investment in the health of communities in Del Carmen, considering that this equipment will be used on a long term basis in the health centers.

Health is wealth, as they commonly say. This is one reason that Cherry Mobile continues to support the health sector of our country, believing that as we invest in the health of the communities, we empower them and make them ready to grab opportunities for growth. We support public medical institutions by providing them lacking equipment necessary to cure patients that have acquired diseases. Our objective is in line with the goal of Mayor Coro of Del Carmen; we desire to augment the needs of those who live along the poverty line. We desire to provide accessible health care to the poorest of the poor. We value the overall health of the community because only in unity can a community adjust, grow, and eventually change.

Cherry Mobile continues to expand the reach of this program to areas where community health is least supported by the national government. Again, the principle is to help change the nation one community at a time, and for Cherry Mobile, distance is no problem as long as help is given directly to those who really need it.